Long term orientation describes the virtue regardless of truth. It is reflected in thrift and perseverance versus respect for tradition, fulfilling social obligations, and protecting one’s ‘face’.

Example: Japanese apology (exaggerated and comical)
There is a new study out by Minkov on LTO: 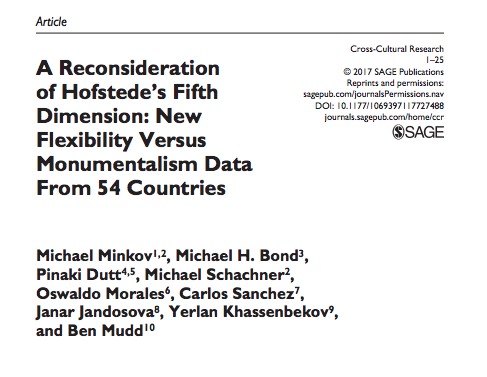 Hofstede’s “long-term orientation” (LTO) may be one of the most important dimensions of national culture, as it highlights differences on a continuum from East Asia to Africa and Latin America, strongly associated with differences in educational achievement. However, LTO’s structure lacks theoretical coherence. We show that a statistically similar, and theoretically more focused and coherent, dimension of national culture, called “flexibility versus monumentalism,” or vice versa, can be extracted from national differences in self-enhancement and self-stability or self-consistency, as well as a willingness to help people. Using data from nearly 53,000 respondents recruited probabilistically from 54 countries, we provide a new national flexibility-versus-monumentalism index that measures key cultural differences on the world’s East–West geographic axis and predicts educational achievement better than LTO or any other known dimension of national culture.