Collaboration is suggested by many management consultants as most favorable way of working for international undertakings. All of you, who have participated in such might have experienced that there are certain cultures for which collaboration works well, but then there are others for which despite all possible efforts, it remains difficult.

Looking at the combinations of the cultural dimension: Uncertainty Avoidance Index (UAI) and Power Distribution Index (PDI) might shed some light on it.

“The combination of two high scores UAI and PDI create societies that are highly rule-oriented with laws, rules, regulations, and controls in order to reduce the amount of uncertainty, while inequalities of power and wealth are allowed to grow within the society. These cultures are more likely to follow a caste system that does not allow significant upward mobility of its citizens.

When these two Dimensions are combined, it creates a situation where leaders have virtually ultimate power and authority, and the rules, laws and regulations developed by those in power, reinforce their own leadership and control. It is not unusual for new leadership to arise from armed insurrection – the ultimate power, rather than from diplomatic or democratic change.”

Countries that would be affected (only countries with high values shown)? 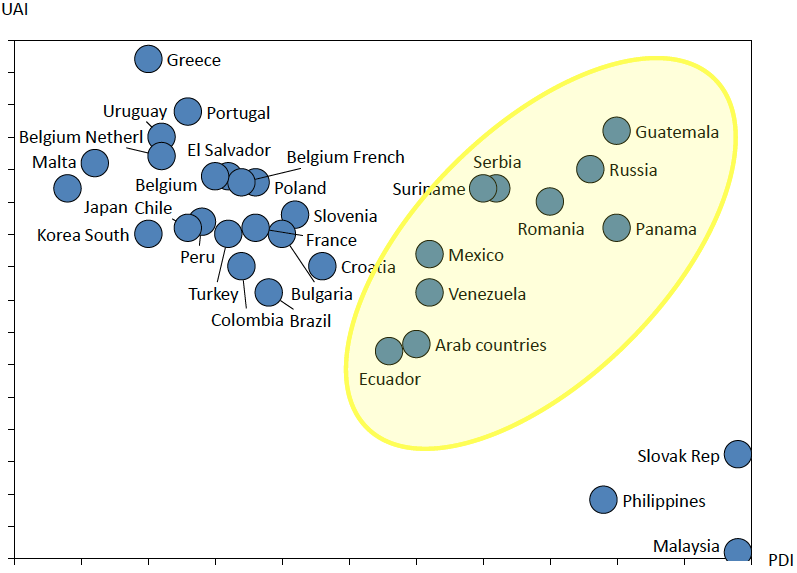 Cultures in the yellow area show a tendency to seek ultimate power. Collaboration is probably not a natural feeling way of working.

Is that a problem? No. Cultures have succeeded and failed in all variations. It just needs to be considered when planning and judging targets that require contributions of people with different UAI/ PDI levels. Company culture and leadership can overcome any type of cultural stereotype – both ways (more or less power seeking).
Readers responded to the question: When facing culturally based conflicts in your daily life – be it with people seeking for ultimate power – or other cultural differences, which one is giving you most headaches? The results were: 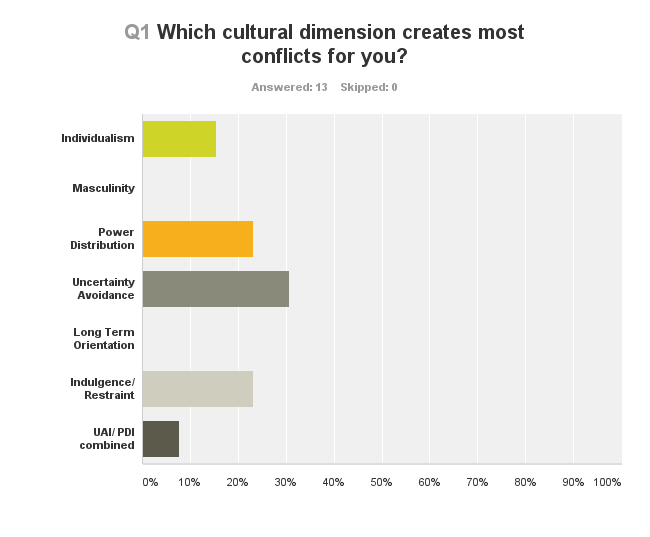 Which countries are high or low in which cultural category? See here: Hofstede